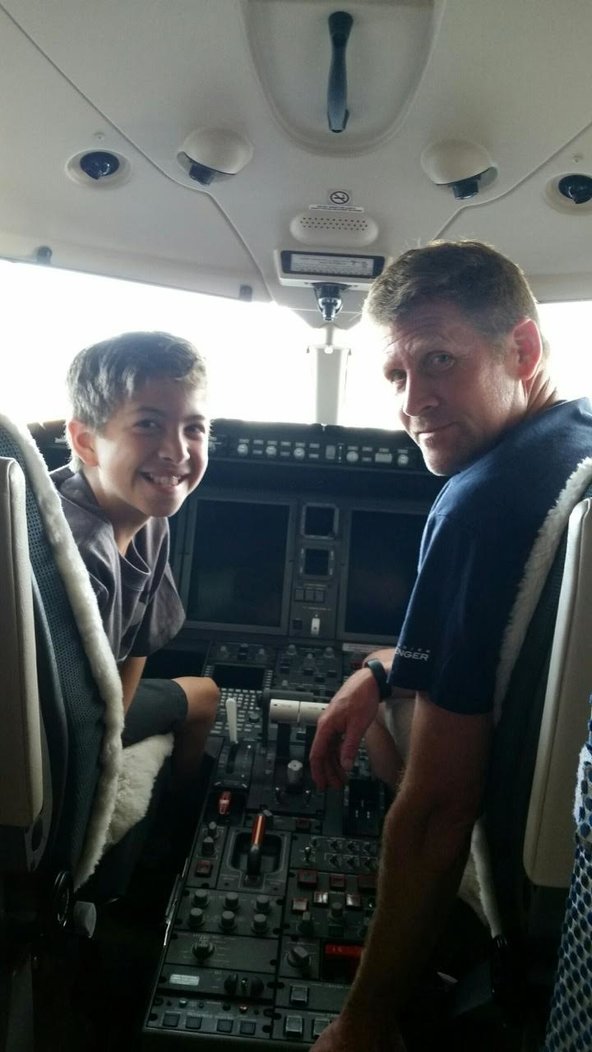 When my pilot husband had a heart attack overseas, I lied to our 11-year-old son. At the time, I thought it was the right decision. I was wrong.

In February, 2014, Patrick, a corporate pilot who flies around the world in a Bombardier Global 5000, set out with two other pilots to fly his bosses to Johor Baruh, Malaysia, and then on to Dubai, United Arab Emirates. He was 51 then; and (just to let you know this story has a mostly happy ending) he is 52 now.

I had already heard from him on this trip. He landed safely in China for a fuel stop, and he loved me. Then came the scary phone call in the middle of the night.

“Pat’s had a heart attack in Johor,” his chief pilot said. “We’ve rushed him across the border into Singapore. Let’s get you on the next flight out of Seattle. We’ll take care of everything.” I packed. I got my travel plans. I called my daughter, Chloe, 21, who insisted on coming home to be with her brothers; Reed, 17, and 11-year-old Tanner. (We live on Bainbridge Island, Wash., a 35-minute ferry ride from where she lives and attends a university in Seattle.) I told her and Reed, both from my previous marriage, what had happened.

I told Tanner that his father was having back surgery.

So instead of hearing about it from me, three of his buddies, all sons of airline pilots, delivered the bad news on the playground at school while I was still on a 22-hour flight to Singapore. He dealt with his fears alone while I, in the air and out of contact, faced mine.

When I reached my hotel at 3 a.m., my husband opened the door. He had hundreds of multi-colored pills and a small incision in his arm, where they had inserted a stent that reached his heart’s clogged artery.

At the time, Pat wholeheartedly agreed with how I handled things with Tanner, even though Pat never forgave his mom for not discussing it when his father dropped dead from a heart attack at 43, when Pat was 14. We thought Tanner had escaped worry-free.

But when we called Tanner to let him know that Pat was O.K., Tanner started crying and ran from the phone. When I later explained to him that I was trying to protect him, he said, “Mom, I need ‘protecting’ from a robber, not from hearing that my dad had a heart attack.”

How could I have done things differently?

According to Dr. Steven Curtis, a family therapist and affiliate professor at Antioch University’s psychology department, there needs to be more trust and honesty with kids. “You shouldn’t have excluded Tanner,” he said. “You could have said, ‘Something is going on with daddy’s heart, and I’m going to check it out.’”

Dr. Curtis recalls that during the September 11, 2001 attacks, his sons’ teachers said to keep it quiet. “I strongly disagreed,” Dr. Curtis said. “Kids are wise. Everyone was talking about the jets that crashed into the towers. If kids find out secrets in private, then they have no one to talk to about their fears.”

I stayed in Singapore for another 10 days. Pat remained for a month, then returned to the United States for months of nonstop hoop jumping, and the taking of innumerable medical and fitness tests and the filling out of mountains of forms with the Federal Aviation Administration (which is the way it should be).

The good news is that his pilot’s license was reinstated in July 2014, and he’s been flying full time ever since.

It’s hard for parents to express ourselves aloud when we’re frightened. I know that part of the reason I didn’t talk to Tanner was that I didn’t know how I could do it without breaking down. I was terrified myself, and part of me thought I’d return home with my husband in a body bag. Instead of talking, I took refuge in rush and planning. But when we don’t give our children a forum in which to express their fears, we unwittingly (as Dr. Curtis pointed out) do more harm than good.

I wish I had talked to Tanner and given him a chance to face his fears and mine. I wish I had been there for his first tears, and given him what he needed to meet his friends at school with strength. I wish, too, that I had let him see how people react in a time of crisis: by pulling together and counting on each other, so that he would have known that whatever happened, he had Chloe, Reed and me to rely on and help him through. If we hadn’t been hiding things from Tanner, we could have all opened up about our fears.

I’ll probably never forgive myself for letting him be blindsided, and putting him in a situation that demanded a stiff upper lip instead of a situation where he could talk with his family and his friends about what he was feeling. He needed that, and as it turns out, so did I.